Dougie Poynter is an English musician and songwriter that is best known for being the bassist for globally renowned pop rock band, McFly. Also a fashion model, clothing designer, author, actor and philanthropist, Dougie Poynter was a member of one of the most famous and celebrated boy bands of all time.

Poynter has recently founded the rock band INK as he continues to pursue his musical talents. Poynter is also an incredibly demanded and sought after figure outside of music, a front-row fixture at LCM and other global fashion weeks, garnering invites from top brands including Topman, Burberry, Louis Vuitton, Moschino, and Saint Laurent Paris. Runway-side, Poynter is celebrated for his trendsetting personal style.

Also a children’s author and strong environmental advocate, Dougie has supported a host of charities and is available to hire as a performer through the Champions Music and Entertainment. Becoming the bass player for McFly at the age of just 15, Dougie Poynter and the band rose to fame and became the most popular music group in the world. The group’s first single, 5 Colours in Her Hair went straight to the top of the charts and their album followed as it went to the top of the UK albums charts and in doing so earnt McFly a Guinness World Record for being the youngest band to have a debut album enter the charts in the top position, a record held by no other than the legendary band, The Beatles.

Credited as a lead writer and co-writer on many of McFly's tracks, Dougie Poynter served as the lead writer for McFly seventh number-one hit single, Transylvania. Also, the bassist for McBusted, a collection of performers that combined from McFly and Busted, Dougie has had 7 number one singles and sold over 10 million albums.

The Creative Director of his clothing line Polonius, Dougie's unique style and music taste transfer directly into his DJ sets as he has expertly transferred his abundant musical knowledge on to the dance-floor at some of the biggest fashion brand parties across the UK. An instantly recognisable figure that is most certainly a household name within the music industry, the exceptionally talented Dougie Poytner is available to hire as a singer, model or celebrity for your next event through the Champions Music & Entertainment where he is certain to add to the prestige and glamour of any occasion.

Contact Champions Music & Entertainment to enquire about hiring Dougie Poynter today. Get in touch by calling us on 0203 793 4042 or by emailing [email protected] now. 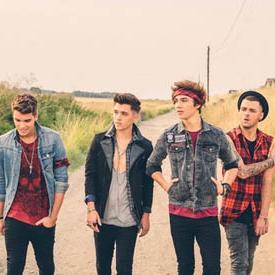