Famous for being among the five Eurovision winning acts from British soil, Brotherhood of Man have established a reputation as giants within popular music. Still touring across the country, with their catchy songs and sweet melodies, the pop band are perfect for all manner of events.

Brotherhood of Man became European sensations when they became British Eurovision winners in 1976, thus becoming the first UK band to win the contest. They belong to an elite club, alongside Sandi Shaw, Lulu, Bucks Fizz and Katrina and the Waves as the award-winning alumni from the contest that has eluded the country on so many occasions.

"Save your kisses for me, save all your kisses for me…” Anyone who has witnessed the Eurovision Song Contest winners in 1976 will remember the catchy lyrics and pumping live show. Their performance took the continent by storm and saw the pop band Brotherhood of Man swipe the evasive gong for the UK.

Their achievement was made greater by their win being comprised of the largest percentage of votes ever. The single became the biggest selling Eurovision song of all time – shipping five million and topping the charts in more than 30 countries.

In 1977 the band were given the honour of appearing at the Royal Command performance, which was part of the Queens Silver Jubilee celebrations. Additionally, they have topped the bill at almost every theatre/ concert hall in the UK, including the esteemed venues of The London Palladium and the Royal Albert Hall.

Since Eurovision, the famous band rode the waves of their success, worked hard and grew their fanbase to become one of the most exciting 70s bands around. They had hits with United We Stand, Where Are You Going To My Love?, Figaro, My Sweet Rosalie, Beautiful Lover, Kiss Me Kiss your Baby and Angelo. Altogether, the band has won an incredible 26 platinum, gold and silver discs. Recently in 2019, The Brotherhood Of Man GOLD CD reached number 29 in the official album charts.

Most of the hits from the band were written by Lee Sheriden and Martin Lee. The members who wrote the songs have been awarded for their talent, with them claiming three Ivor Novello Awards.

As a result of their Eurovision and post-Eurovision success, the band now have a huge European following, which stretches through Scandinavia to Northern and Central Europe. They are still widely appreciated in the United Kingdom and their stunning live show is renowned continentally.

Unlike many pop bands whose line-ups change regularly, this group still retain some original members. The Brotherhood of Man that is still touring today consists of the same four people who were there roughly 40 years ago – Martin Lee, Lee Sheridan, Sandra Stevens and Nicky Stevens.

Touring continually to this day, Brotherhood of Man recently appeared in the Music & Mayhem series of concerts, teaming up with the comedian Jimmy Cricket in a show that was described as: “Variety at its best”.

To book Brotherhood of Man among the bands for hire for your corporate entertainment, music festival, wedding or private party, simply contact the Champions Music & Entertainment agency via agents@championsukplc.com. Alternatively, speak to a member of the management team directly on 0207 078 78 76. 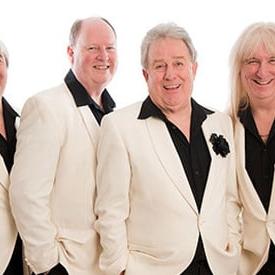