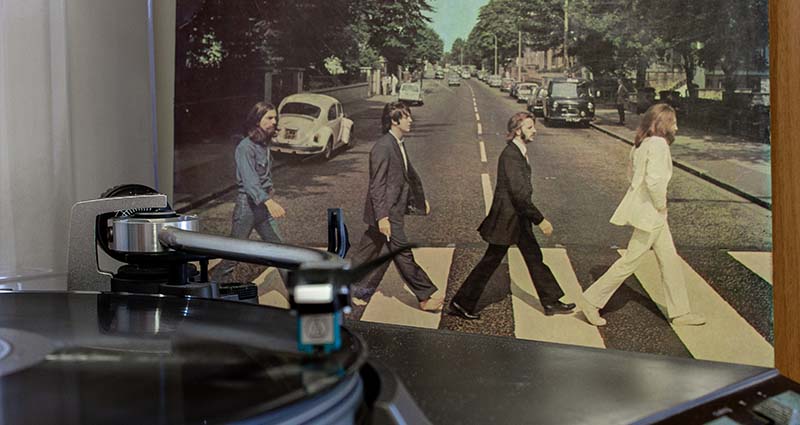 Beatlemania once again packed the streets of Abbey Road on the 50th anniversary of the release of the iconic Abbey Road album on Thursday. Fans made the pilgrimage to the site of the historic cover shot, shutting down roads and holding up traffic at 11:38 am on Thursday morning, the supposed time of the original cover shot.

Beatles cover band, the Fab Four joined the festivities to recreate the shot themselves. Dressed as the pop heroes, the tribute act stepped out of a replica of John Lennon's famous psychedelic Rolls-Royce Phantom V to the roar of onlookers. They took in the "magical" scenes with an estimated 2000 people from all over the world.

People came from Canada, Europe and Chile, as well as all four corners of the UK to pay tribute to the four stars who took pop by storm in the 1960s. One Paul McCartney lookalike even proposed to his girlfriend in the midst of the celebrations. She said yes.

As the queues and traffic jams built up, police arrived and reopened the road. Abbey Road Studios opened their doors for visitors to have their photo taken against a cardboard backdrop of the famous zebra crossing.

The event proved to be a reminder of the timelessness of one of the world's most loved bands. It also gave visitors a chance to understand how the remarkable cover photo came to be, when an old friend of John Lennon, Iain Macmillan took photos of the Fab Four from a step ladder as police kept the road clear of oncoming traffic.

50 years ago today, @TheBeatles gathered at EMI Studios for one of the most prolific photoshoots of their career. A policeman held up the traffic as photographer Iain Macmillan took six shots of the group walking across the zebra crossing just outside the studio. #AbbeyRoad pic.twitter.com/ROgV1SE9d4

Were you inspired by Fab Four's impromptu appearance at the 50th anniversary of the Abbey Road album shoot and want to book them or another Beatles tribute band at your event? Look no further. Champions Music & Entertainment have a selection of the best Beatles tribute acts, and they have some brilliant names too. Take a look.

California's hottest Beatles tribute band, The Fab Four were the band that descended on our shores to recreate the historic Abbey Road album on Thursday. They are regularly on tour in the USA, playing at prestigious theatres from Indiana to California, Ohio to Alaska.

The Bootleg Beatles were one of the original Beatles tribute bands. They have played the rooftops of 3 Saville Row and even at Buckingham Palace. Former Beatles guitarist, George Harrison would even say of the band:

"You probably know the chords better than I do."

Beatlemania have played the classic songs of the fab four far and wide. Playing in front of brands including Adidas, Virgin Atlantic and alongside the likes of Madness and Coldplay, they are one of the most talented UK Beatles tribute acts.

Another Beatles tribute band who have achieved global success playing in Dubai, Beijing, New York and a host of Beatles hotspots in the UK, The Backbeat Beatles' flawless homage to the pop superstars has earned rave reviews. "probably the nearest you will get to the real thing" - Daily Mail

An authentic tribute to the sounds of the 60s that propelled The Beatles to unprecedented heights, The Cheatles have wowed crowds at weddings, corporate and public events internationally. A fixture of Liverpool's annual International Beatles Week, the tribute band are one of Liverpool's favourite acts.

With close to a quarter of a million Facebook fans, The Cavern Beatles are one of the most widely followed Beatles tribute acts. They are one of the prized resident bands at Liverpool's world-famous Cavern Club which was a second home to the Beatles in the early days of their career.

Champions Music and Entertainment are home to some of the UK's finest tribute acts for parties, corporate events and private functions. Contact us by filling in our online contact form or by calling a booking agent directly on 0207 07 878 76.