5 Acts Who You Should Consider For Your Wedding Entertainment 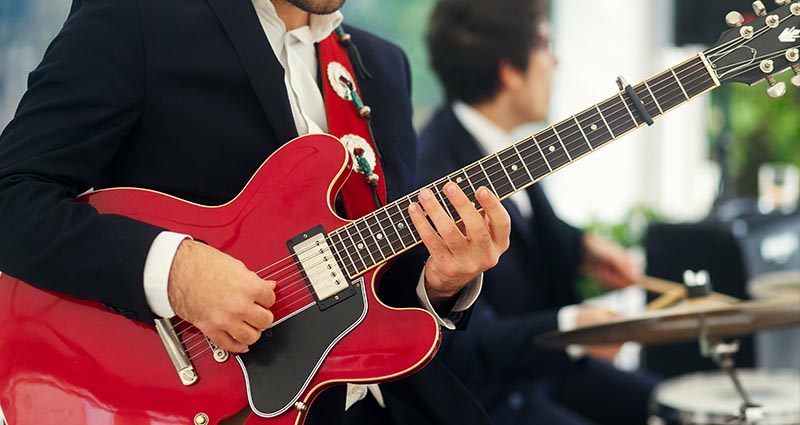 If you're here for some wedding evening entertainment inspiration, here are five top big day picks from our team of booking agents.

Fancy a Great Gatsby themed wedding to give an extra kick?

"The band were great – it is a testament to them that both young and old all danced the night away – including the trendy twenty-somethings!!" - Caroline, Wedding Booker

The coolest jazz and swing band in London right now, D-Jazz offer an amazing blend of pop and Motown hits in an upbeat swing style. Unique, interactive and beautifully modern, there are few wedding bands for hire with the same style.

And it's not all about style with D-Jazz, they sound great too. Even ask Tom Cruise, Prince William and Nicole Kidman who have all been on the receiving end of a stunning concert from this insatiable band. D-Jazz without a doubt offers an inimitable style, presenting a Latin flair, and a tribute to golden age jazz and Ratpack that is rarely done quite so well!

"For happy-go-lucky couples it’s the perfect ‘relationship’ soundtrack; there are plenty of tracks here that would make ideal ‘our song’ choices." - BBC

In the early to mid-2000s Scouting for Girls were the live music band making waves at the top of the charts. After making an impression on the Glastonbury Unsigned competition, the group went on to storm the British charts, with their self-titled 2007 album becoming number 1 in the UK charts. Since then, they have remained a popular act with audiences across the world.

Iconic and exciting - Scouting for Girls is the ideal wedding band. Recognisable to all, the lively pop hits will keep guests enthralled until the early hours.

The best Adele tribute act in the UK right now, Natalie Anne is every bit Adele

The likeness is startling while the sound is exceptional. Natalie has embarked on world tours herself, delivering sold-out shows in Dubai, Egypt, Germany and the UK. She has wowed at the likes of the Best Western, Haven and The Holiday Inn as well as featured on television for MTV and the BBC.

Available with piano accompaniment, Natalie's Hometown Glory show has set her out as one of the most gifted tribute acts around today. Natalie does justice to one of the world's favourite songbooks. You can browse our range of tribute acts, covering all the big name bands and solo artists from history to the modern day.

"They scored a fantastic 9.12 and have a glowing report from the team relating to their professionalism, the guest's positive response, great choice of songs and their performance overall. Looking forward to seeing more of them in the future." - P&O Cruises

With a spectacular setlist featuring the biggest and best hits from soul and Motown, Soul 'Kinda' Wonderful are exactly what they say on the tin. 3-time winners of the National Tribute Awards in 2016, 2017 and 2018, the soul band have shone on the world stage.

Having played for the likes of David Beckham and Sir Trevor McDonald, and performed at prestigious hotels and venues the world around, this band are a class act capable of delivering songs from the likes of The Drifters, The Four Tops and The Temptations with an unrivalled authenticity.

"Jon Allen is a leading light in the magic world and his amazing effects have baffled me and countless others." - Derren Brown, TV Magician

If alternative wedding entertainment is in your mind ahead of making your wedding arrangements, then look no further than the extraordinary magic act that Jon Allen brings. Able to walk around the room wowing audiences with a series of stunning tricks or impress the whole room with mind-defying illusions, Jon really is one of the best event magicians in London and the world.

With tricks aplenty, Jon has baffled audiences from Hollywood to London. Jon ensures his interactive and enjoyable shows never fail to capture the imagination. You can also search our extensive selection of wedding magicians.

Our roster includes all the entertainment your wedding could possibly need. A diverse range of acts cover the traditional to the outrageous, so whether you want an acrobat or a comedian, a live band, wedding DJ or a string quartet, our experts are able to recommend the right act for your big day.

Contact Champions Music & Entertainment by emailing [email protected] or by giving us a call on 0207 078 7876 now.