Joel Ewens’ appreciation of the King of Rock and Roll has seen him become a household name in the world of Elvis tribute acts. Having carved out a successful career for himself as an Elvis impersonator, his show Joel is Elvis on Stage has become one of the most sought-after tribute acts in the country.

Having begun singing Elvis songs at a young age, Joel’s study of the original Elvis’ act has seen him establish one of the most accurate tribute shows around. As such, Joel’s appearances as Elvis have taken him across the globe, immersing crowds in the live Elvis experience wherever he goes. Joel has performed at a vast number of notable events, including a show-stopping appearance at the Professional Elvis Impersonators Association.

In addition, Joel has performed for a vast number of established clients, including The Four Seasons, Grosvenor Hotels, the Institute of Contemporary Arts and Campion Finance. Joel’s performances as Elvis are characterised by his powerful vocal skills and his enviable stage-presence. Having mastered much of Elvis’ musical repertoire, Joel has been known to incorporate a vast number of Elvis favourites into his performance. Songs like Blue Suede Shoes, Hound Dog, Suspicious Minds, You Gave Me A Mountain, I Can’t Stop Loving You, In the Ghetto, Whole Lotta Shakin’ Goin’ On, Welcome To My World and What Now My Love have all been paid tribute to throughout Joel’s thrilling performances.

Joel has wowed loyal Elvis fans across the globe. As a result of his vast success, he continues to enjoy popularity as an ideal booking for corporate entertainment, party entertainment and private events. Undoubtedly one of the greatest cultural icons to have ever lived, Elvis Presley is one of the best-known performers in music history. Originally hailing from Mississippi, Elvis began his musical career in Memphis, Tennessee during the mid-1950s.

Fusing influences from a number of different musical genres, including blues, soul, gospel and rockabilly, Elvis was soon propelled to international stardom. As a result, he went on to become the best-selling solo artist of all time, winning multiple Grammy Awards along the way. Sure to put on an incredible performance, Joel’s Elvis tribute act is a show not to be missed. With vast performance experience behind him, Joel continues to build upon his reputation as a legend among Elvis tribute artists. In doing so, he has a bright future ahead of him as a top-class entertainer.

Contact Champions Music & Entertainment to enquire about hiring Elvis On Stage today. Get in touch by calling us on 0203 7934 042 or by emailing [email protected] now. 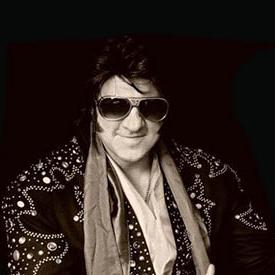 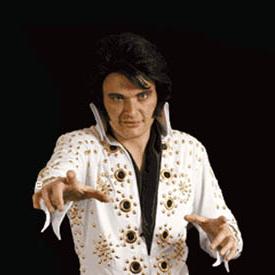