Lucinda Rhodes is an exciting British actress, producer and solo artist. With a stunning vocal talent, Lucinda presents herself as a rousing entertainer, capable of inspiring a crowd for all manner of live shows.

Lucinda's infectious charm and all-encompassing stage show draws her audiences to the dance floor. Lucinda is a multi-talented and versatile media personality. With a career spanning 15 years, she has starred alongside some of the biggest names in the entertainment industry. As a young and gifted artist, Lucinda played Cinderella in the 2005 Playhouse pantomime and then performed in the stage version of the BBC series Allo 'Allo.

In 2007, Lucinda started touring as a member of the girl band and UK acapella group, From Above. She returned to television and quickly rose through the entertainment ranks, built a strong fan base and appeared on long-running television shows including Cavegirl, Dream Team, My Parents Are Aliens, Harry And Cosh and many more. Her film career has taken her all over the world including South Africa, Morocco, Malaysia and Italy to name but a few.

Her film credits include The Kid, Fall Of The Essex Boys, Dead Cert and Pericles. She returned to the music scene and has worked with acts including Lemar, Andy Abraham, Jason Donovan, The Honeyz, Kylie Minogue and Craig David. She has the talent to engage huge audiences and has performed to crowds of over 30,000 people. Her charisma and breezy personality immerses crowds in her performances. There is no doubting Lucinda’s dedication and outright passion for being on stage. She brings a fun and dynamic brand of live music, fusing pop with soul to compliment her smooth soulful voice- making her a popular UK singer.

Lucinda is an all-around showgirl with a five-star act to suit any event, from wedding entertainment to corporate functions, product launches to private parties. Audiences of all shapes and sizes will relate and engage with Lucinda’s style and graceful stage presence. She has also had significant success as a film and television producer, having worked with some of the biggest name companies and production titles which most recently include her role as a development producer in the feature films Mary Queen of Scots and Camelot. She has produced a number of other short and feature films such as Undercover Hooligan and Mass Effect.

This wonderful British performer has seen success at a host of events and is suitable for corporate entertainment, music festivals and more.

Contact Champions Music & Entertainment to enquire about hiring Lucinda Rhodes today. Get in touch by calling us on 0203 7934 042 or by emailing [email protected] now. 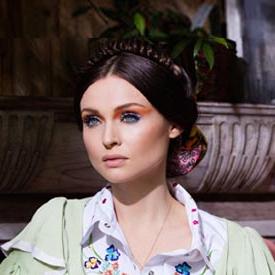