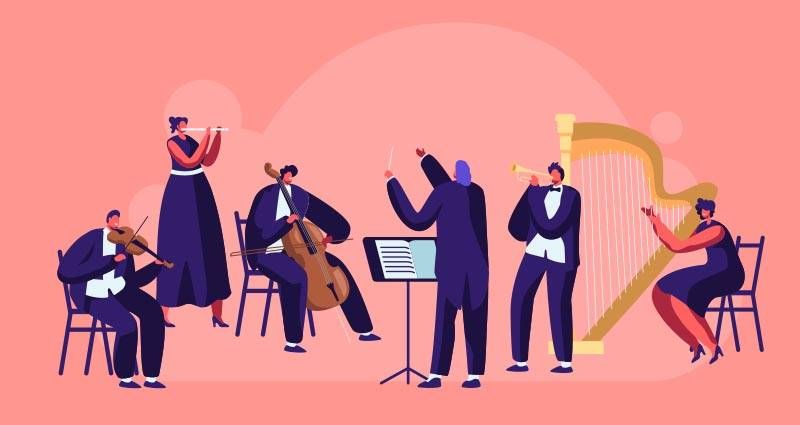 Classical musicians possess the artistry needed to create standout moments at events. Welcoming you into an unparalleled sonic soundscape, classical music is an art form that compliments all occasions, from honouring the day to commemorating an event of lasting importance. With many modern musicians reimagining traditional symphonies, classical music has been brought into the mainstream, proving to be a genre for all ages and demographics.

With appreciation for composition skills, we at Champions Music & Entertainment have a whole host of classical musicians and acts on our roster who enchant audiences at every event they attend.

What Are Some Benefits of Classical Music?

Offering a transformative experience, classical music has many benefits, for example:

Event planners want to keep their guests happy, and classical music does just that! Whether you are organising a networking event or a corporate celebration, a classical artist will leave audiences feeling content.

Event planning can be a high-tension job. As stress can exceed your ability to function or continue a task, hiring a classical act through Champions Music & Entertainment can make your event stress free, as well as add a relaxing aura and smooth running of your event.

Who Are the Top 10 Classical Acts?

An international violinist, Gary Lovini has performed at some of the world’s most prestigious venues and events. First picking up the violin aged eight, Gary’s events can see him perform both jazz and classical music. He first made an impact on British TV by appearing on New Faces. At the age of just 16, he became the youngest ever performer on the illustrious Cunard Line cruise liner, a record that has never been broken. As well as performing a whole host of classical pieces, Gary is continuing to compose new music all the time and can bring his unique work to people up and down the country.

“Gary is an amazing musician! The best violinist I’ve heard live in central Florida! Learned the music necessary for the ceremony and completely had the audience buzzing during the cocktail! What a wonderful artist indeed!! Highly recommend” - Luis

A classical crossover duo, Eden provides a classical twist to everyone’s favourite hits including songs from Take That and Metallica. They can also perform tracks from musicals and are no stranger to lending their vocal talents to their own music. Having released two albums in their career, Eden has also starred on stage performing for Prince Albert of Monaco and at major sporting events. Despite mainly singing as a duo, they are equally as adept at being supported by a five, seven, nine or even 16-piece band or orchestra, demonstrating their versatility.

“As always performed to the highest standard” - Robert

Not going anywhere without her 40-stringed harp, Fiona Hostford provides a twist to the traditional harpist. As well as playing music from world-renowned classical composers, Fiona is also able to play popular chart songs and movie themes at her events. Not only not only does she showcase her remarkable performances on the harp, but Fiona is also an excellent tutor to young artists who want to learn the instrument. Highly sought after, she has played for huge audiences at some of the most prestigious hotels in the world.

“Fiona’s performance gave the event the magic that it required; it was tender, gentle, and totally spine tingling” - Lee

Escala is a revolutionary electric string group, comprising Stephanie Benedetti on the viola, Helen Nash on the cello, Victoria Lyon and Honor Watson on the violin. The quartet made the finals of Britain’s Got Talent in 2008, where they impressed the judges with their fierce live electric string performance. Performing classical covers, instrumentals and techno versions of songs, Escala provides a bespoke experience, tailored to your needs.

Performing their classical crossover cover of The Impossible Dream, Richard and Adam made it to the finals of series seven of Britain’s Got Talent. After their remarkable performance, the duo were established as two of the finest opera vocalists in the country. Their first album, The Impossible Dream sat at the top of the UK charts for four consecutive weeks, smashing UK records. Richard and Adam have received high praise from many events, including a standing ovation at Britain’s Got Talent Big Celebration. Book them today to impress your audience!

Young solo artist, Faith Tucker is an up-and-coming sensation. Faith found her passion and talent for opera aged 12 and was later accepted as a junior student at the Royal Birmingham Conservatoire and won the 2015 Peter Vernon Trophy for her outstanding progress. With a mezzo-soprano range, Faith is described as the “Beyoncé of the opera world”. She became a Britain’s Got Talent Semi-Finalist in 2019 at the young age of 17 and has gained fans worldwide with her undoubtable talent.

Elegant and classy, Emily and Sophie make up the opera duo, Belle Voci. The youthful duo shares a passion for classical music and joined forces to work towards making opera music more accessible to a wider, younger audience. Blessed with angelic voices, Belle Voci made it to the finals of The Voice UK and blew the judges away. Bringing passion and sheer elegance to their performances, Belle Voci sings well-loved opera classics as well as contemporary songs with a classical touch at events of any size.

“Belle Voci are an asset to any event or production. Wonderful voices with exceptional tone, with real star quality. They are a joy to work with and the most charming positive individuals in the business.” - Mark. C, British Forces Foundation

Paul Potts rose to fame as the first winner of Britain’s Got Talent in 2007. His captivating performance of Nessun Dorma won the hearts and minds of both the judges and the audience, granting him the beginning of his success as a tenor. Since his BGT stardom, Paul starred in the Hollywood film, One Chance, toured across 45 countries and released six studio albums. Continuing his tours and performing classics, Paul is a highly sought-after performer.

The World’s No. 1 Musical Theatre Group, Collabro, are a boy band of esteemed performers. With cultivated skills behind each voice, Matthew Pagan, Thomas J. Redgrave, Jamie Lambert, and Michael Auger make up a collaboration of musical talent. Their upbeat sound led them to win Britain’s Got Talent in 2014 with their rendition of their audition song in the finale and later release five chart-topping albums. The group have gone on to entertain audiences at the O2, The Royal Album Hall and Wembley Stadium and sold-out venues up and down the country. Hire Collabro for your event to charm your audience!

“Collabro are polished and professional and undeniably provide a first-class evening’s entertainment, fans will not be disappointed.” – Glasgow Theatre

Soprano Lesley Garrett has been in the industry for over 40 years. Classically trained, Lesley has perfected her vocals, regularly appearing in opera, concerts, on TV, on CD and in musical theatre. Winning critical acclaim and the admiration of many fans, Lesley has released nine solo CD’s, receiving awards like the Gramophone Award for Best Selling Classical Artist of the Year for her album Soprano in Red. Awarded a CBE in 2022 for her services to music, Lesley is a respected talent.

If you would like to book any of our remarkable classical artists for your next event, get in touch with Champions Music & Entertainment today. Call one of our helpful agents on 0203 7934 042, email us at [email protected] or complete our online form and a member of our team will get back to you.

> More posts by
Blog Back to the blog...
Related Posts
The Best String Quartets to Hire for Your Next Event
Top 10 Britain's Got Talent Contestants To Hire For Your Event
15 Entertainers for 2022 Events, Parties & Conferences