Exciting musical theatre act, Beyond the Barricade, present a spectacular show which is ideal as the entertainment for concerts, theatre productions and events.

Book Beyond the Barricade Today!

Book Beyond the Barricade today!

An unbelievable musical theatre showcase, Beyond the Barricade, takes its name from the themes posed in hit musical Les Miserables and much of the show features the songbook of the popular stage production. And the similarities don’t stop there as this production brings together some of the biggest stars of musical theatre. The group met performing for the original Manchester production of Les Miserables. By 1999 the group was established and audiences quickly learnt of the ability of their stellar cast and the brilliance of their stage show.

Today the collective continues to tour across the country, bringing the beloved songs of Les Miserables and other much-loved musicals to stages big and small. Performing hits from The Lion King, Blood Brothers, The Jersey Boys, Jesus Christ Superstar, Miss Saigon, Mamma Mia and many more, the supergroup are one of the most exciting carriers of West End and Broadway songs.

Now one of the nation’s most popular musical theatre acts, Beyond the Barricade has stunned audiences around the world with their soaring vocal and instrumental talent. They have entertained at theatres, arts centres and concert halls, with a schedule that books up months in advance. They have also proven themselves in-demand for corporate events, award ceremonies, gala dinners and product launches.

The musical theatre group offer a blockbuster of a show, a spectacle of magnitude and skill to have audiences on their feet, in rapturous applause and singing along to the classics of theatre from throughout the years.

Dramatic, dynamic and live, they command a crowd with effortless poise. David Fawcett, Poppy Tierney, Andy Reiss and Katie Leeming make up the singers, while Russ Kennedy plays bass and tuba, Dave Williams takes to the drums and David Lane sticks to the keyboard. Behind the scenes, Ed Railton (Lighting Designer) and David Glover (Sound Engineer) work to make each show a seamless success.

All with significant experience, the band and surrounding crew have had a success of their own. Together they have taken their astonishing show to the York Barbican Centre, the Spa Theatre in Scarborough, the Edinburgh Playhouse, the Opera House in Manchester and the White Rock Theatre in Hastings, to name but a few.

Beyond the Barricade are excellent event entertainment and are the perfect party band to impress your guests. Simply get in contact the Champions Music & Entertainment agency via agents@championsukplc.com, or contact a member of the management team directly on 0207 078 78 76. 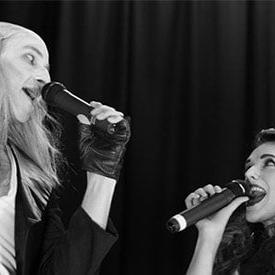 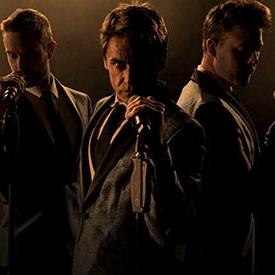 Frankie and The Dreamers Tribute to The Jersey Boys 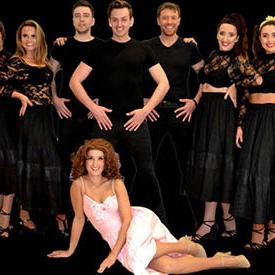