Brotherhood of Man is a British treasure, rising to fame after they won the 1976 Eurovision Song Contest. Consisting of a lineup of talented musicians, the Brotherhood of Man have in total released 16 studio albums and claimed over 15 million record sales. Widely known for songs such as Kiss Me Kiss Your Baby, Figaro, Angelo and Oh Boy (The Mood I’m In), the group have secured four Top 20 albums and had three No.1 singles across their decorated careers. Continuing to be a hit on the nostalgia and LGBT+ performing circuits, Brotherhood of Man is a great addition to events.

Back in 1969, record producer and composer Tony Hiller created Brotherhood of Man. The original line-up of the band consisted of John Goodison, Sue Glover, Sunny Leslie, Roger Greenaway and Tony Burrows, with their first worldwide hit titled United We Stand reaching the Top 20 in Canada, Australia, the UK and the US. Up until 1972, the band line up frequently changed, including other members such as Hal Atkinson. In 1972, Tony Hiller established a firm line up of Martin Lee, Nicky Stevens, Lee Sheridan and Sandra Stevens. This lineup released the song Kiss Me Kiss Your Baby, which reached No.1 in both Belgium and the Netherlands, proving their international dominance. They then went on to perform Save Your Kisses For Me at Eurovision and win.

Since winning Eurovision, the band has gone on to achieve No.1 on the UK Charts and be recognised for one of the 50 Best Selling Singles of the Decade. They have also performed on the Royal Variety Performance and spent 15 weeks in the Top 75 of the UK Charts. Unfortunately, in the 1980s the band's success began to decline and by 1983 they decided to disband. In 1985 they regrouped and continued to perform throughout the 90s, 00s and in 2006 they also performed at the 50th anniversary of the Eurovision Song Contest.

Today, Brotherhood of Man continue to be a popular addition to events across the globe, performing their top hits such as Angelo and Kiss Me Kiss Your Baby. Having become one of the very few British contestants to win Eurovision, the band are held in high esteem and are widely loved by many British listeners. Pop superstars, Brotherhood of Man are a perfect addition to a range of events, performing their top hits that are suitable for a variety of ages.

Contact Champions Music & Entertainment to enquire about hiring Brotherhood Of Man today. Get in touch by calling us on 0203 7934 042 or by emailing [email protected] now. 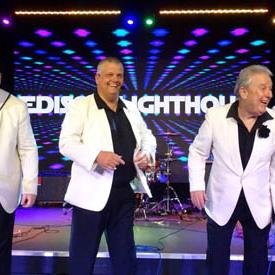