Coco is a top party band in the United Kingdom. With pulsating rhythms and beats, they have made waves on the entertainment circuit. Playing pop, soul and dance hits from the past an present, they are are a hit with all audiences.

Perfect for engaging a crowd, inspiring singing and dancing - Coco has been a consistent presence at corporate events, private parties, festivals and weddings over the years, with their show proving popular with audiences of all shapes and sizes.

The band have performed at prestigious venues including the Royal Albert Hall, the London Palladium, Her Majesty’s Theatre and festivals such as Sundown, V Festival, Wireless and Ibiza Rocks. Their clients have also included The Playboy Club, Royal Festival Hall, The Arts Club and Grosvenor Casinos.

Owing to their musical talent, the group are able to set the tone for an event, adapting the tempo to fit your every need. The five-piece soul band are comprised of lead vocalist, Amy Evangelou; guitarist, Courtney Jones; keyboard player, Yue Jin Tay; bassist: Harry Evangelou and drummer: Ben Faggand. Each shares a musical distinction, with Amy, the vocalist leading the group with an amazing range and confidence. The band behind her are some of the most gifted session musicians in the country.

Firing out classic songs from various genres and from decades past, the group can arrange their setlist however you wish, as they offer dance, soul, funk and Rhythm and Blues with a main focus on the ‘70s and ‘80s. They are equally adept at playing more contemporary numbers too.

The cover band enjoy offering up old favourites like 'Twist and Shout' by The Beatles, 'Brown Eyed Girl' by Van Morrison, 'Sweet Home Alabama' by Lynyrd Skynyrd, 'I Will Survive' by Gloria Gaynor, 'Dancing in the Streets' by David Bowie and Mick Jagger and 'All Night Long' by Lionel Richie. They bring much of the timeless playlist of Chic, including 'Le Freak', 'Good Times’, 'Get Lucky' and 'I Want Your Love'. They are also happy to offer up songs such as 'Price Tag', 'Valerie', and 'Sex On Fire' - all of which have been chart hits in more recent times.

Members of the band have featured on radio, television and on the West End, and together make one of the most exciting event bands in the country. A funky collective, the group bring authenticity to the songs of the past while freshening them up in their own unique way.

"Thanks so much, you guys were a delight to work with and sounded amazing as always. I look forward to the next time you will be playing." - Natasha, Ceasers Entertainment

"What an awesome time! The band was more than I had imagined. I will definitely have the band for our next party - thanks so much for a wonderful night." - Angel, Gerald Metals Group

"Such a fantastic evening, an absolutely fantastic band and great music. Everyone was up dancing all night. A real pleasure having you at the club." - The Arts Club, London

A fantastic choice to bring excitement and energy to your special occasions and corporate events, Coco is one of the best bands for hire in the country. Book as your event entertainment today via Champions Music & Entertainment. Get in touch via email at [email protected] or speak to a member of the management team directly on 0203 793 40 42. 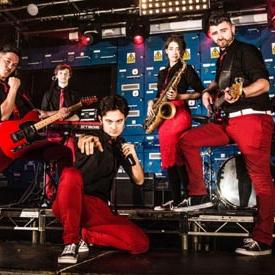