One of the most exciting party bands on the circuit today, The Funtime Frankies are exactly what their name promises. Offering megahits to suit your event from the '50s to the present day, their energetic live performances are not to be missed.

An enticing spectacle for all manner of events, The Funtime Frankies cycle through the biggest dance numbers from all the ages. They can take you back to the Summer of 69 or whisk you forward to the Greatest Day, and impress your guests with everything either side. Their incredible act will create a furore at your event and have everyone singing and dancing on the dance floor before you know what has hit you. They delve straight into concerts with great energy to build an atmosphere that sees a buzz settle into the air. Ordinarily the cover band perform with 5-part vocals accompanied by lead singer, guitarist, bassist, keyboardist and drummer to present a mouthwatering fusion that captures the sound of classic songs.

They can also add a 3-piece brass band to proceedings for that big band sound, and a female vocalist to add another dimension to their gigs. National Winners of both the 2017 and 2018 Wedding Industry Awards prove their majestic talent. They are the perfect wedding band to appear around speeches and ceremonies, but they are not limited to being ideal for wedding receptions, their eclectic showcase is perfect for party entertainment of shapes and sizes. Their setlist will have something for everyone, and can be discussed prior to their performance.

With songs like 'Jailhouse Rock' by Elvis Presley, 'Brown-Eyed Girl' by Van Morrison, 'La Bamba' by 'Los Lobos' and 'Great Balls of Fire' by Jerry Lee Lewis, the group have the 50s and 60s covered. The likes of 'Play That Funky Music' by Wild Cherry, 'Sweet Home Alabama' by Lynyrd Skynyrd and 'Oh What a Night' by The Four Seasons cover the 70s.

The 80s is wrapped up by songs such as 'Billie Jean' by Michael Jackson, 'Uptown Girl' by Billy Joel and "Livin' On a Prayer" by Bon Jovi. "Can't Touch This" by MC Hammer and 'Fresh Prince of Bel Air' by Will Smith show that the songs of the 90s are still popular to this day, while modern numbers like 'I Gotta Feeling' by Black Eyed Peas, 'Happy' by Pharrell Williams, 'Get Lucky' by Daft Punk ft Chic and Mr Brightside by The Killers prove that the noughties and 2010s are still churning out great music. With such an upbeat setlist, if you need to drop the tempo and bring those singalong songs in a laid-back way, the band also offer a selection of chill out songs for background music, first dances and last songs.

Contact Champions Music & Entertainment to enquire about hiring The Funtime Frankies today. Get in touch by calling us on 0203 793 4042 or by emailing [email protected] now. 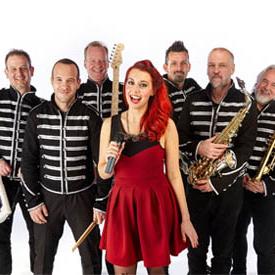 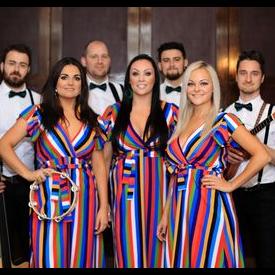 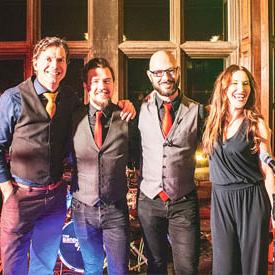