Dan Knights’ Storm have become one of the most in-demand bands for hire in the country. Offering chart-topping hits from decades past and present, they have been able to impress at corporate events, private parties and special occasions.

With the remarkable vocals of Dan and the instrumental talent of the cover band behind him - they can whip up a frenzy at your event to bring even the most stodgy guests to the front, boogying to the sounds of Boomtown Rats, Lady Gaga, Take That, Lionel Richie, Avicii, The Killers and many more. The group have become one of the country’s greatest party bands, fostering the sounds of pop music from the 70s onwards. They can incorporate classic musical theatre numbers, from shows such as We Will Rock You, Jekyll and Hyde and Phantom of the Opera, as well as play the superhits of such artists like Olly Murs, and soundtracks from the likes of 80s party machine, Ultravox.

This special pop and rock band can really excite your guests and delegates. With a wealth of musical titles available to them, Dan Knights’ Storm can fit their song list to your event, to blend in or cause a stir. Whatever capacity you want the band to perform in, they can arrange their showcase around speeches and ceremonies or play a flat outset. A huge hit at product launches, award ceremonies, wedding receptions and festivals, as well as being the go-to for cabaret clubs and hotel entertainment - the tribute band have become one of the most exhilarating acts on the concert and club scene.

Known for his powerhouse vocals, charismatic stage performance and commitment to the stage, singer Dan Knights is an acclaimed presence in music, and now he brings with him a top-class team of musicians. The musical theatre and pop band offer an interactive spectacle, fun for audiences of all shapes and sizes. They will have guests jumping over each other to get to the dance floor and dancing all night long. As a solo vocalist, Dan has played alongside a host of stars from the 1980s, including Culture Club, Bananarama and Jackie Graham to name just a few – he has also worked with many contestants from Britain’s Got Talent and the X-Factor. Wonderfully charismatic and energetic on-stage throughout, this talented band can engage guests with songs from all over the disco sphere. Don't miss out on their incredible party.

Contact Champions Music & Entertainment to enquire about hiring Dan Knights' Storm today. Get in touch by calling us on 0203 7934 042 or by emailing [email protected] now. 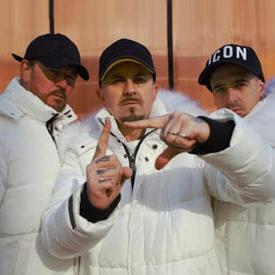