dS:uK are one of the UK's leading Dire Strait's tribute bands. Talented and dedicated to their craft, this band can play all of the hits, including Romeo and Juliet and Walk of Life. Comprised of a full six-piece band, each member is representative of an icon musician from Dire Straits themselves.

Few acts can pay tribute to the influential Dire Straits quite like dS:uK. Each member of this band is a star in themselves, as each of them flawlessly mimics the British rock band's style of performing. From wedding receptions to corporate parties, dS:uK will fill the dance floor in seconds, head's banging, feet stomping to such songs as Private Investigations. With over 1,100 weeks in the UK album charts, this band's setlist is classic hit after classic hit. Starting with Pete Wilson on Saxophone, he is described as having an "Alto [that was] forged in the heart of a dying star". If that doesn't persuade you, this "Chris White" tribute artist adds dimension to the performance with his brass and wind sections. David Knight, or "Mark Knopfler", is on guitar and vocals.

Having been a full-time musician since the age of 18, his passion for performing is infectious, putting his audience at ease instantly. Guests gravitate toward him, drawn in by his mellow tones. Onto Alistair Begg, the bassist of the band, who pays homage to the great "John Illsley". This slick player is not just a performer, but a teacher too - a testament to his unbeatable skill. No band is complete without a drummer, and dS:uK are no exception.

Alec Herald, or “Pick Withers, Terry Williams or Chris Whitten”, boasts a degree in Popular Music Performance - and it shows. He flawlessly beats his way through Dire Strait's iconic bridges, leading the flow of the song with his expert skill. Lachlan Horne is a man of many talents. Capable of performing as “David Knopfler, Jack Sonni, Phil Palmer or Hal Lindes", this self-taught guitarist is also a singer, songwriter and guitar teacher.

Last, but not least, we have Rick Benbow. Rick tickles the keys with ease, representing "Alan Clark or Guy Fletcher" on the keyboard and piano. There are few tribute bands as dedicated and passionate as dS:uK. If their experience doesn't speak for them, their evident commitment to Dire Straits is enough to prove their ability on stage. No matter the audience demographic, everyone knows how to dance to Dire Straits. Like any other classic rock band, their pounding drums and slick guitar riffs will have the audience headbanging all night long.

"I've seen a lot of pretty shocking tribute bands. I was genuinely blown away by (dS:uK)." - Ian

"Thank you for a fantastic night of great music you brought to the Assembly Hall... You rightly deserved your standing ovation." - Jenny

"Brilliant tribute band. Just close your eyes and you could actually be listening to the real thing." - Ben

Contact Champions Music & Entertainment to enquire about hiring dS:uK today. Get in touch by calling us on 0203 7934 042 or by emailing [email protected] now. 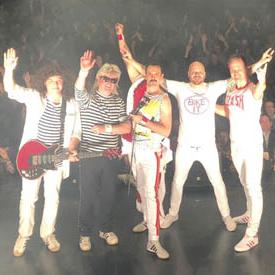