One of the most iconic British rock bands to date, Dire Straits were formed in 1977. The music itself drew from many different places for inspiration, from jazz to rock and roll.

Dire Straits to this day rank fifth in the world for time spent on the UK charts, with over 1100 weeks on the highly acclaimed list. With a career spanning across 15 years, they had endless hits including Money for Nothing, Sultans of Swing, Tunnel of Love. With so many classic hits to choose from, our Dire Straits Tribute Bands have the musical ability and stage presence to entertain any audience. Having been selected for their passion, professionalism, and ability to recreate the legendary band, our acts are a must at any event. 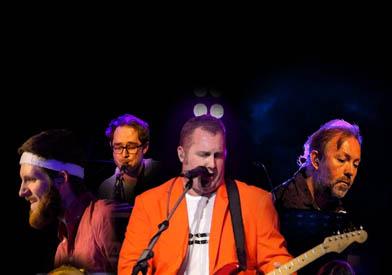 Our Dire Straits tribute acts have years of experience to perfectly recreate the sombre vocals, electric stage presence and iconic guitar riffs of the real thing. Able to provide a full live band, they will fill your event with the iconic music of the 80s, keeping your guests rocking all night long.

Formed in London, 1977 by the lead vocalist and guitarist, Mark Knopfler, Dire Straits are one of the world’s best-selling music artists, with sales over 100 million. After their first album, Sultans of Swing, shot into the Top Ten Charts in both the UK and the US, the band quickly received critical acclaim.

From there, the band released several hit singles in the ‘80s including Romeo and Juliet (1981), Private Investigations (1982), Twisting by the Pool (1983), Money for Nothing (1985), and Walk of Life (1985). Arguably the most successful album the band released was Brothers in Arms, which sold more than 30 million copies, was the first CD to sell a million copies and is the eighth best selling album in UK Chart history.

Influenced by Jazz, Rock, Country and Blues, the bands sound is unlike anything else. Dire Straits released their first album, Dire Straits, in 1978, which was followed by a second album in 1979, called Communiqué. Just over a decade later, the band released their final album, On Every Street.

Over the course of their career, Dire Straits won three Brit Awards, four Grammy Awards, two MTV Video Music Awards and one Juno Award for International Album of the Year, in 1986.

Contact Champions Music & Entertainment to enquire about hiring Dire Straits tribute acts today. Get in touch by calling us on 0203 7934 042 or by emailing [email protected] now.