The Acro-Chaps are a trio of talented entertainers and acrobats who perform daring stunts and trapeze routines to the amazement of crowds around the world.

Resplendent in their costumes and well-maintained moustaches, The Acro-Chaps bring back the magic and majesty of the Victorian era. The hilarious trio are firm believers that there is nothing in life that cannot be improved by the application of a good moustache and they live this life to the fullest. Their jaw-dropping show is one-of-a-kind with fearless stunts and is ideal as the walk around act for club nights, birthday parties and corporate events.

The talented trio sees them perform a wide array of acrobatic stunts with a little bit of crowd participation and a lot of humour. From human pyramids to hands stands and even a comedy trapeze act they have the perfect entertainment to suit your audience and venue.

Jamie Frith is ‘The Brave One’ and is often found balancing precariously atop the human pyramid. His bravery is only matched by his cleverness which saw him obtain a 1st class degree in Maths from Cambridge University. He used this knowledge to specialise in the structural mathematics of the perfect ‘walrus’ moustache and eventually ran away to join the circus. He studied his craft at Circomedia. After graduating he joined the Acro-Chaps and has since performed across the globe including as far afield as Dubai and Hong Kong. He is also a corporate entertainer working for the likes of McDonald's and other companies.

David Downie is ‘The Strong One’ who forms the base of the human pyramids. Boasting that he had a full moustache from the tender age of seven David joined the circus at the age of 26 and soon developed his performance into a full-time career. His success as an acrobat saw David land a role in a production of Barnum: The Musical before joining the Acro-Chaps. His international success has seen him astound crowds in Pakistan, India, China, Dubai, and many other places.

Completing the troupe is Tony Phipps. Known as ‘The Handsome One’ he is often found pimping and preening his moustache prior to a show. Sporting what he himself considers a very dapper ‘tache’ he performs a multitude of hilarious stunts all the while trying to catch the eye of the ladies in the audience. His work has seen him travel all over the world performing as a trapeze artist and acrobat.

Together these amazing moustachioed acrobats bring a show that is bespoke and sure to entertain audiences of all kinds with different themes to fit your mood. From Edwardian Bathers to Sailors, Super Mario Brothers, Circus Strongmen, Victorian Strongmen, and even City Slickers.

A unique act they offer something different to bring to your event and are sure to impress as well as entertain your guests from the first minute to the last. Book them now to ensure your event goes off with a bang.

"Thank you for all your help this weekend for the King's Cross carnival, you were by far our most popular act and the crowd loved you! Your performance, humour and charisma really lifted and made the event, it was very, very much appreciated." - Rebecca Harmer, Network Rail

"You were by far the best and most thoroughly entertaining act of the British Chamber of Commerce Annual Ball in Hong Kong. You guys are brilliantly hilarious and so incredibly talented. I absolutely *loved* your performance!! As did many other ladies that evening, I'm sure." - Melissa, RBS

To book the Acro-Chaps as the entertainment for your corporate event, birthday party, club night, or public event contact the Champions Music and Entertainment agency via email at [email protected]. Alternatively, call a member of the management team directly on 0203 793 40 42. 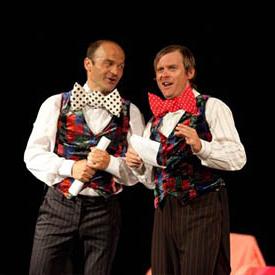 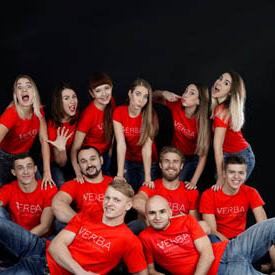