Perfect for ceremonies, galas, corporate events as well as weddings and birthday parties, Verba Shadow team are able to tailor their show to the audience. A talented group of acrobats and contortionists Verba began in 2010. Mastering the art of shadow theatre these Ukrainian artists play with light, shadow and the plasticity of the human form to create intricate stories and landscapes. After performing across venues in their home country they took their act to television and auditioned for Romania’s Got Talent. They astounded the judges and fans alike, building a strong fan base both nationally and internationally.

From here Verba took their show on the road and continued to wow audiences on television featuring on beloved talent shows like Mam Talent in Poland, Das Supertalent in Germany, France Digital Talent and Minute of Glory in Russia. Along with this, they curated a masterful stage show that astounded theatregoers in China, Qatar, Oman, Turkey, Bulgaria, Armenia, and Azerbaijan. Verba returned to the show that gave them their big break in 2015 with a touching shadow story of the world-famous love story, Titanic. More recently the team have been hard at work developing a range of acts to bring to private and corporate clients.

Three full-length shows are on offer, namely ‘Shadow Hollywood’, ‘Shadow Space’ and ‘Kingdom of Shadows’. Verba is constantly looking for cutting-edge ideas and themes to explore through the medium of shadow. Their commitment to this creative endeavour makes them the perfect entertainment for your event and one that is sure to entertain and boggle the mind. Verba has amassed an impressive number of headlines and accolades in their short history.

Besides appearing in over 100 shows across the world they have also been the headline act at Germany’s Jewish talent contest, Jewrovision, the Eventex 2016 in Bulgaria and the Sharjah International Narrator Forum in the United Arab Emirates. They have also gone on to feature a spatial show in Lebanon at the Sabis 130 Anniversary and a narrative show for Poland’s Pracuj.pl. A dance act as skilled and flexible as their dancers Verba is ideally placed to perform for stage shows, corporate events, wedding receptions, television ads, or film work. Book them now to amaze your guests with this contemporary art form.

Contact Champions Music & Entertainment to enquire about hiring Verba Talent today. Get in touch by calling us on 0203 793 4042 or by emailing [email protected] now. 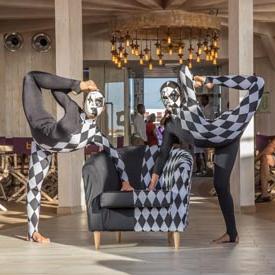 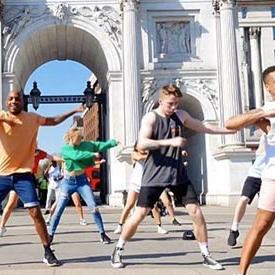 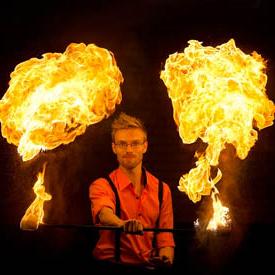