The Upbeat Beatles are a phenomenal Beatles tribute band. Together for more than fifteen years, the band have toured all over Britain and Europe to keep the world's favourite song book alive.

The Upbeat Beatles bring a douse of Scouse to any event. Their signature humour helps them to live up to their name and makes for a charming side dish to their talent and likeness to the Fab Four. They are a renowned tribute act, known for their authenticity and ability - giving them a large and dedicated following. They have taken favourable testimonials from venues up and down the country, all impressed with their crowd turning renditions of the classics.

As a Beatles tribute band the Upbeat Beatles have performed at various events and venues, provided corporate entertainment at hotels and theatres whilst also headlining smaller concerts for audiences at weddings and 60’s themed nights. With a set list that, obviously includes all the hits from Britain’s biggest boy band and will delight audiences the Upbeat Beatles do fantastic renditions of Yellow Submarine, I Wanna Hold Your Hand, I Feel Fine and Ticket to Ride.

The group are among the leading tributes to the rock n’ roll superstars, whose legacy has survived generations. The original artists enjoyed worldwide fame in a decade at the top of the rock-pop sphere between 1960-70. The Liverpudlians scoured the UK and toured abroad, even conquering America - which has proved elusive among British exports in the past and present.

The foremost Beatles tribute band in the UK The Upbeat Beatles aim is to get everyone up and thanks to their well-honed stage persona’s and true-to-the-original style - they always fill up the dance floor. To complete this stunning Beatles tribute band the boys have recreated themselves in the image of each original member of the infamous music act. Giving audiences a chance to feast their eyes on their very own John, Ringo, George and Paul.

"It was like turning the clock back 40 years - FANTASTIC!" - James, Leeds Castle

Contact Champions Music & Entertainment to enquire about hiring The Upbeat Beatles today. Get in touch by calling us on 0203 793 4042 or by emailing [email protected] now. 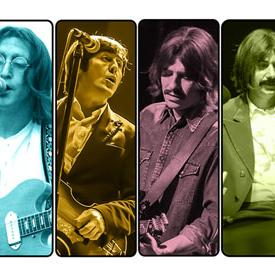