Staying safe while we are open – we are currently open for business to support our clients needs both virtually and for future events. For more information, please email [email protected]ampionsukplc.com 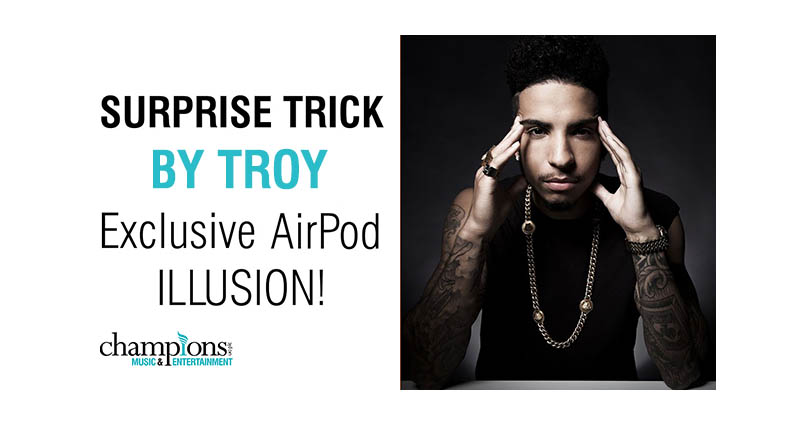 Want to see magic in action? Then Troy would be the perfect person for your event, as he is bound to dazzle audiences with never-before-seen tricks.

At the age of 24, Troy released his self-titled TV show on Channel 4, a move that propelled his career. With his charming personality and unique take on magic, Troy is set to dazzle at corporate and public events.

In this exclusive interview with Troy, he discusses his experience performing magic online, along with who inspired him to become a magician and his career highlights.

Q: How have you found performing virtually? And what are some of the positives and negatives of virtual performances?

“Initially, I wasn’t sure how performing virtually was going to work out. The experience was going to be different, and I was actually hoping that this was a short term thing; obviously, as I realised that we were going to be in this situation a lot longer, I knew I had to put something together and it actually requires a different skill set. To actually come up with a new material that works over the screen, so people still feel like they're getting that magical experience.

“I spent a lot of time putting an act together and it works really well. I got really positive responses; it's just a different way of doing magic.”

Q: How have you gained such a following on social media, and then retained that following?

“So, I initially got my following from my TV show, which are two series of, and that really put me out there. That was before social media – Instagram, in particular – blew up. It was on the verge. My following blew up once my show came out. I think people really enjoyed me as a performer and obviously they haven't seen someone like myself do magic.

“They haven't really seen this type of person in this space. So, I think it was interesting. I think the way I managed to retain my audience is being who they enjoyed watching on TV. The other thing is, people are quite interested in me as a person, aside from my magic. I think I've been able to show people a bit about my life.

“I've got a loyal following, so I'm happy with that.”

Q: How do you ensure audiences of all demographics are engaged during your performances?

“I don't try to single out any particular type of demographic to watch me. I think magic is a universal language, and I feel like it talks to everybody no matter how old you are, what your background is - everyone enjoys it. And everyone loves to be in the atmosphere of an illusion. With what I do, it translates to everyone, and I think it will continue to do so forever.

“It’s like that with music. But I guess with music, you have genres as well; different demographics will be interested in different genres. Magic is across the board, and is quite universal for everyone to appreciate and love.”

Q: Who inspired you growing up? And why did you want to become a magician?

“There’s a lot of people who've inspired me. I guess in magic, David Blaine was a really big influence on me – I've seen a lot of other magicians as well, but I guess when I was 12 years old and I saw Blaine on TV, obviously I'm seeing a guy who had the same complexion as me, he was a bit street. I was like ‘Wow, it's a guy that kind of looks like me and he does magic’.

“And I never thought of myself as a magician. It was just a seed that was planted. And obviously I was fascinated with what he did. And then, as I started doing tricks for friends and family, the interest started to build. To receive that kind of reaction from someone is very addictive. It's like being a comedian, making someone laugh - once you get a whole room laughing, you don’t want to stop. You just keep going.

“And now, 20 years later, I'm still doing it. As I grew as a performer, I knew that I had to walk my own path as a magician. And I looked at other really amazing performers for inspiration, like Prince and Michael Jackson – I’m deconstructing their character and the magic that they give as performers.

“This is without even doing magic tricks. This is just their aura. I’m just inspired by those types of people. And I'm thinking ‘how can I get that for me?’ those types of performers are very influential for me.”

Q: What has been the highlight of your career so far?

“I think the highlight of my career is being able to perform magic to this day as a full-time job. I would say that is because of my TV show, that really put me on the map; it put me up there with a lot of other great magicians. My show is still being shown today all around the world, even though it was made five years ago. I'm still in shock, and I'm still getting messages.

“So, obviously, that made a massive impact in my life. And I'm just very happy that I can still perform and just show my magic to people and they're still enjoying it.

“If they're still enjoying it, I'll keep doing it.”

Contact Champions Music & Entertainment to provisionally enquire about Troy for your event today. Simply call a booking agent on 0203 7934 042 or complete our online booking form to request more information.

> More posts by
Blog Back to the blog...
Related Posts
Here's Why Magicians Are The Ultimate Entertainers For Your Event