An American rock band headed up by lead singer and namesake Jon Bon Jovi, the band have been blessed with hit after hit over the years and are still going strong today.

Such is their influence, new bands are constantly forming to pay tribute to the iconic Bon Jovi. At Champions Music and Bands, we have the best Bon Jovi tribute acts on our books from up and down the country, ready to perform at your event. Performing some of the classics like Livin' on a Prayer, It's My Life and You Give Love a Bad Name live at your event, your guests will go wild as they rock out to some of the best songs ever written. 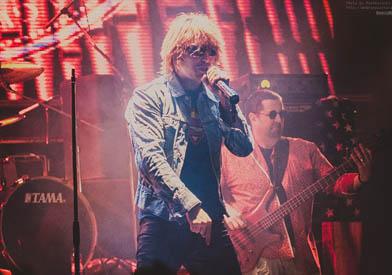 Able to provide a full band of expert musicians, our Bon Jovi tribute acts will fill the dance floor with guests. Well versed with a catalogue of some of Bon Jovi’s greatest hits, our tribute acts sound just as good as the real thing, thanks to their strong voices and professional musical ability.

As if their skill wasn’t enough, our tribute acts can also provide extensive PA systems to fill your venue with some of the best tracks in rock history. With so much going for them, our tribute acts are the most talented musicians on offer. Not to be missed, whether for a crowd-pleasing gig or a dance-floor filler at your wedding, hiring a Bon Jovi tribute band is an opportunity not to be missed.

Formed in 1983, New Jersey, Bon Jovi is an American rock band that altered the music industry forever. By 1985, the band released their first two albums and debut single, Runaway, which broke into the Top 40.

In the following year, Bon Jovi gained critical acclaim for their second album, Slippery When Wet, which sold over 20 million copies and included two number 1 singles, You Give Love a Bad Name and Livin' on a Prayer. Over the course of their career, Bon Jovi released 14 studio albums, five compilations and three live albums.

In total, the band sold over 100 million records worldwide, performed over 2,700 concerts to over 34 million fans - making them one of the best selling American rock bands in the world. In recognition of their contribution to music, Bon Jovi was awarded the Award of Merit at the American Music Awards in 2004 and inducted into the UK Music Hall of Fame, the US Rock and Roll Hall Of Fame and Songwriters Hall of Fame in recent years.

Contact Champions Music & Entertainment to enquire about hiring Bon Jovi tribute acts today. Get in touch by calling us on 0203 7934 042 or by emailing [email protected] now.