Pink Floyd was a massive English rock band who formed in London. They progressed to fame with their progressive and mind-blowing music. They were recognisable by their use of philosophical lyrics, sonic experimentation, extended compositions and extravagant live performances. They are one of the most commercially successful, influential groups in the history of popular music.

They founded in 1965 with Syd Barrett on guitar and lead vocals, Nick Mason on drums, Roger Waters on bass and vocals, and Richard Wright on keyboards and vocals. They became popular through London’s underground music scene during the late 1960’s. With Syd Barrett leading the group they went on to release two charting singles and their successful debut album entitled The Piper at the Gates of Dawn. 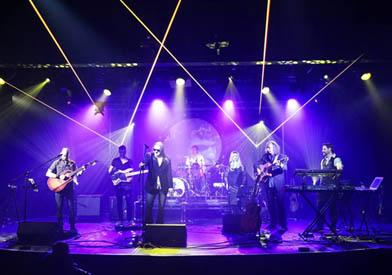 Shortly after this release Guitarist and vocalist David Gilmour joined the group and the following year Syd Barrett left the group due to deteriorating mental health. Rodger Waters proceeded to be the primary lyricist and leader and the group continued to produce albums such as The Dark Side of the Moon, Wish You Were Here, Animals, The Wall and The Final Cut.

Richard Wright left the band in 1979 due to creative tensions and shortly after in 1985 Rodger Waters followed. David Gilmour and Nick Mason continued the band and Richard Wright re-joined them as a session musician. The three proceeded to produce two more albums and they reunited in 2005 to perform as Pink Floyd in London as part of the global awareness event Live 8. Syd passed away in 2006 and Richard passed in 2008. Following their deaths, the remaining members of Pink Floyd released their final album in 2014 entitled The Endless River it was based largely on unreleased material. Pink Floyd were added into the American Rock and Roll Hall of Fame in 1996 and the UK Music Hall of Fame in 2005. By 2013, the band had sold more than 250 million records worldwide, including 75 million certified units in the United States.

Contact Champions Music & Entertainment to enquire about hiring Pink Floyd tribute acts today. Get in touch by calling us on 0203 7934 042 or by emailing [email protected] now.