Axel Blake shot to fame after he claimed the title of 2022 Britain’s Got Talent winner. A talented and hilarious stand-up comedian, Axel specialises in observational comedy and won over the British public with his comedy genius. Having formerly performed at the Indigo at The O2, Axel is a seasoned performer who has been seen on Amazon Prime Video. Also a personable presenter, host and content creator, book Axel Blake for an unforgettable night of comedy or as a charismatic host for your next event.

Axel Blake is a talented comedian, who made headlines after he became the winner of Britain’s Got Talent 2022. Specialising in observational comedy, Axel has enjoyed several years on the entertainment circuit performing various headline shows and supporting the likes of Eddie Griffin and Dave Chappelle. Having also worked with the likes of SBTV and UNILAD, Axel is no stranger to a large crowd and commands one with ease. When looking for a hilarious stand-up comedian or personable host and presenter for your next event, book Axel Blake today!

Having enjoyed several years as a stand-up comedian, Axel was further propelled to fame after competing on the 2022 series of Britain’s Got Talent. Auditioning for the show, Axel wowed judges with his comical talent, claiming the golden buzzer from Simon Cowell. With David Walliams claiming ‘a comedy superstar was born tonight’, it comes with no surprise that Axel soared to the finals, claiming the £250,000 prize money and a spot at the Royal Variety Show performing in front of the Royal Family. A comedian with pure talent, Axel is set to headline countless more comedy shows and venues across the country.

Before Britain’s Got Talent, Axel had already established some fame of his own, having formerly performed at the Indigo at The O2 with his live show I’m Not Gonna Lie. In 2020, Axel’s live show at The O2 was released on Amazon Prime, sharing his comical talent with the world. Axel has also worked as a presenter for UNILAD and SBTV, among various other viral content creation roles. Having built a reputation as a talented comedian, Axel is a hit with audiences of all ages, making him a perfect choice for a range of comedy nights, parties and events.

When looking for a talented comedian or Britain’s Got Talent act to perform at your next event, look no further than Axel Blake! Adding star quality to events of all manner, Axel commands an audience with his unique and hilarious observational comedy. Describing himself as confident with an animated persona, Axel also makes a perfect event host or presenter, making audiences laugh whilst ensuring that events run smoothly. Whether you are looking to have guests in stitches with a comedy sketch or for a personable event host, don’t hesitate in booking Axel Blake today.

"We have discovered a star" - Simon Cowell 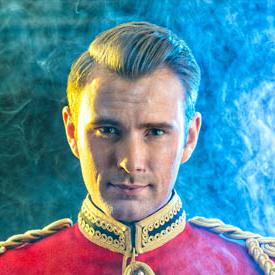