British comic, event host, actor and entertainer Stephen K Amos is a multi-award winning stand-up comedian with a distinct and delightful comedy style. He is a regular on Australian and British television and has won a host of awards.

Stephen K. Amos has had audiences around the world howling over his hysterical and relatable past experiences intertwined with cultural issues. All are punctuated by his quick wit and impeccable comic timing. Stephen is known for his regular appearances at London comedy clubs and on the international comedy scene. He is a regular on both British and Australian television and began his career as a comedy compere at London’s Big Fish comedy clubs where he was nominated for Chortle’s Best Compere Award on no less than three occasions.

Making his debut as a stand-up comedian in 2001 Amos has since travelled the world with his comedy show, performing at festivals, live events and making numerous appearances at international comedy competitions; including the Australian International Comedy Festival and the Edinburgh Fringe Festival. Amos is known for his intellect and observational comedy, he frequently involves his audience members in his stand-up routine and has subsequently developed a strong and loyal following. He has appeared as the headline comedian at a variety of clubs and regularly performs at London’s Comedy Store.

As well as working as a comedian, Stephen K Amos is also an accomplished actor, appearing most notably in the Edinburgh Fringe Festival’s performance of One Flew over the Cuckoo’s Nest. He is also frequently called upon to work as a host and entertainer for live chat and television panel shows. He has appeared and performed on Live at the Apollo, in front of the royal family at the Royal Variety Performance, on popular panel shows such as Have I Got News For You, Good News Week and QI and graced famous cultural talk shows such as The Wright Stuff and The One Show. Amos has had success on the radio and in acting roles across British and Australian television.

He appeared in EastEnders, Stewart Lee’s Comedy Vehicle as well as children’s hits The Legend of Dick and Dom and Tinga Tinga Tales. Stephen is a consummate professional and an engaging stand-up comedian, exciting audiences with his hysterical real-life stories - which cover his youth and issues of race with quick-witted observations, catchphrases and audience interaction.

"Half the audience would probably be squirming with terror, were it not for his winning charm and irrepressible charisma. Amos gives the impression of one born to entertain. He keeps the gags flowing thick and  fast with sharp observations and stories before producing more devastating one-liners from up his sleeve." - Metro

"This year he has gained in stature, the first black British comic to really rock the Fringe in years. It's a strong show, with excellent gags and the finest ending on the Fringe." - Sunday Times

"Stephen K Amos is the embodiment of charisma. From the first minute to the last, he never lets the audience out of the palm of his hand. Amos's show is packed with well-observed material, performed hilariously. His affection for the audience is the killer blow, culminating in an all-singing, all-dancing party to which everyone is invited. No one could possibly have left this feel good show without a beaming smile on their face. A real stormer." - Chortle

Contact Champions Music & Entertainment to enquire about hiring Stephen K. Amos today. Get in touch by calling us on 0203 7934 042 or by emailing [email protected] now. 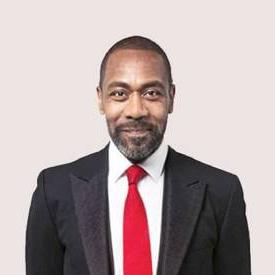