Bob Brolly MBE is a renowned solo artist and one of the greatest radio presenters in the country. His talent and charm have earned him plaudits across platforms for many years and he has become the ideal event entertainer.

Bob Brolly MBE is an accomplished solo artist with flair and expertise for entertaining. His talents have been witnessed in various forms, as he has taken on roles as a leading radio presenter, event host and brilliant solo vocalist. Bob, himself, has admitted:

"nothing compares to the thrill of walking out on stage and entertaining an audience with a repertoire of classic hits."

His passion is unquestionable and his illustrious career is a tribute to his hunger as a performer to reach the highest level he could. Bob Brolly is best known for his thriving career as a broadcaster, and for many years he has presented his award-winning Irish show every Sunday from 4-7 pm on BBC Radio West Midlands. Bob has also run the incredibly popular afternoon music and chat show every weekday to listeners from Coventry and Warwickshire on BBC Radio, cementing his status as one of Britain’s greatest radio presenters.

His stellar reputation and the standards that he has adhered to throughout his broadcasting career were rewarded in 2003 when he received an MBE from Prince Charles for his services to broadcasting and for the inspirational work he does for charities, which has seen him raise over £2 million.

Bob was a regular choirboy at Waterside Chapel, growing up in Ireland before he set off on a whirlwind voyage across an array of job roles for six years. Eventually, he let his heart decide and he co-founded a band, Calvary, whereupon he took the role of lead singer and they went on to tour the world, performing as far away as Australia and America.

Audiences cannot help but sing along to the wonderful fusion of Irish hits and country classics that underpin the sets performed by Bob. As an event entertainer, he is currently in very high demand and has recently performed at some of the top national venues. They include Wembley Arena, Birmingham’s National Indoor Arena and the world-famous Symphony Hall, also in Birmingham.

Bob is most certainly the ideal solo artist for any event. His charm, wit and ability to converse with any audience make him a brilliant choice and his performance will round any evening off perfectly. In fact, he has such a loyal following that he has his very own membership club.

Book Bob Brolly MBE as the professional and rousing solo artist for your wedding entertainment and corporate events now. Or for more information, simply contact the Champions Music & Entertainment agency via agents@championsukplc.com alternatively, call a member of the management team directly on 0207 078 78 76. 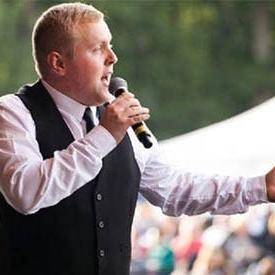