Former X Factor contestant Beverly Savarin is a London born singer with Caribbean roots whose sound is heavily influenced by American music. Gaining a gold status with her debut album, the young artist has already covered a huge amount of ground and her success is only growing.

Although Beverly is only just starting off her career in the industry she has already achieved a huge amount, from chart toppers to platinum records, her success is only growing.

Beverly has performed at some of the biggest venues in the US from the Apollo Theatre to Chaz & Wilsons, Newark Symphony Hall and BB Kings Beverly's success in the US has seen no limits. Her debut album, Beverly The Album impressively attained a gold status this was then followed by her EP Good Bad Girl.

Her release of ultimate club anthem Never Felt This Way which was produced by Jellybean Benitez was a massive hit amongst the dance culture and went on to hit the number one spot on the Billboard Dance Charts for an impressive fourteen weeks. Her incredible vocals collaborated with superstar rapper Eve...Ruff Ryders' First Lady helped achieve platinum selling single Gotta Man!

Beverly has a wealth of experience performing at prestigious locations from her live performances on B.E.T and NBC Weekend Today to her career highlighting performance at the Donald Trump Association Club stages. From the US to the UK Beverly went on to participate in 2011 X Factor and extensively tour with Max Boyce the world famous comedian. Beverly has mastered R&B, Jazz, Opera, Pop, Rap and Soul making her an ultimate threat within the industry, she even spends time performing as a Whitney Houston tribute act due to her remarkable vocal skills.

Make your event into one deserving of a red carpet with the addition of Beverly the versatile, elegant and classy performer. Whether you're looking for a beautiful background sound full of jazz, opera and soul or a full dance floor packed with upbeat pop and R&B Beverly can make your event perfect.

"You went for that high not like, “Oh I just do this in my sleep”. You already know, you don’t need me to say anything, YES! She’s amazing!"
Kelly Rowland - The X Factor

"Technically that was spot on, you hit every note! There is nothing you need to learn or improve on. Yes from me, thanks for sharing your amazing voice with us!"
Gary Barlow - The X Factor

"Beverly Savarin is a consummate professional whose voice and persona will transform your heart and your soul. I have had the pleasure of experiencing Beverly’s performances for several years at Trump National. As a business person she is well planned and organized in both thought and performance execution. Her interaction with her audience is sincere and uplifting, many member’s to whom I have interaction with have told me that they have left her performances feeling both spellbound and elated. Beverly’s Tone and Pitch is so true and clean that many have thought they were listening to a recording instead of a live voice. Her personal presentation is striking with both the allure of a true diva and the glow of an angel. My best remembrance was a night where Beverly sang an impromptu duet at the request of a member who performs on Broadway. They sang a piece from Les Miserables that left the audience cheering. Beverly is a true gift of whom I would expect only greatness and success."
Philip - C.E.C. Executive Chef

If you need any advice or guidance, or are looking to book Beverly Savarin or one of our other music or entertainment acts on our website, don’t hesitate to give a member of the management team a call on 0207 078 78 76 or send us a message via agents@championsukplc.com. 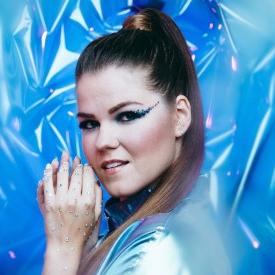