Often recognised for his signature dreadlocks and incredible vocal abilities, Luke Friend is very much a rising star in the world of music. Since his X Factor performances he has appeared at a host of events across the country.

Having appeared as a finalist on the tenth series of The X Factor, Luke has demonstrated his incredible vocal range to audiences across the world. Performing an excellent array of songs all through the competition, Luke has since captured the hearts of the nation.

Having started singing at an early age, it wasn’t long before Luke started performing at open mic nights and pubs. His first taste of success came when he became the winner of TeenStar 2013, a success which spurred him on to enter The X Factor. The very first audition of the series, Luke blew the judges away with his rendition of Ben E. King’s Stand By Me. Progressing through the various stages of the contest, Luke continued to perform iconic songs, including Brian May’s Too Much Love Will Kill You, Billy Steinberg and Tom Kelly’s Alone, Damien Rice’s Cannonball and Keane’s Somewhere Only We Know. Continually impressing his audiences, Luke made it all the way through to the show’s live finals. The show saw him perform alongside fellow English singer-songwriter Ellie Goulding, eventually earning him third place.

Luke’s success on The X Factor provided him with a launch pad from which to start a successful solo career. Having earned a Rising Star of 2014 award, Luke soon signed a record deal with legendary label RCA Records. His debut single Hole In My Heart brought him national attention once again, reaching number 40 in the British charts. Following the single’s success, Luke was quick to embark on his very first sold-out tour, which saw him delight crowds at venues in Bristol, London, Manchester and Glasgow. Shortly after signing a deal with BMG, Luke began working on the release of further musical material.

As one of the most famous UK singers ever to have featured on The X Factor, Luke’s unquestionable talent as a performer has seen him achieve success early on in his career. In a bid to establish himself amongst the country’s top acts, Luke continues to hone his musical craft with every chance he gets. A popular act among The X Factor finalists, the singing sensation continues to enjoy popularity as an ideal act for corporate events and music venues alike.

If you would like to book Luke Friend to perform for your corporate entertainment or private event, contact the Champions Music and Entertainment agency via agents@championsukplc.com. Alternatively, speak to a member of the management team directly on 0207 078 78 76. 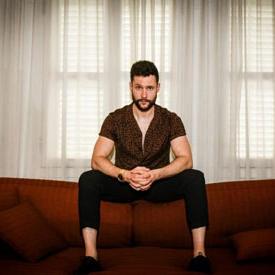