Bringing back the nostalgia of the 90s, our Spice Girls tribute acts replicate the sound, costumes, stage presence and immense atmosphere of the Spice Girls, in one fantastically entertaining performance. 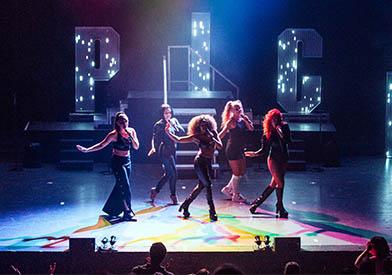 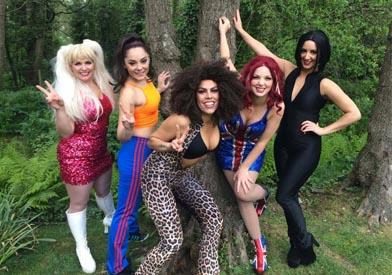 They are perfect for any occasion, whether it be weddings, corporate functions, private parties or other functions. Join our talented tribute acts in celebration of the Spice Girls, paying homage to Ginger, Scary, Posh, Sporty and Baby, the five women who shaped the music in the 90s and early 2000s. Our acts are an ideal addition to any event, thanks to their unbeatable talent and bursting personalities you can rest assured that the entertainment for your event is the best it can be. Ideal for 90s themed parties, fancy-dress events or just general functions, our tribute acts celebrates what it means to have ‘Girl Power’.

With some of the UK’s leading, most authentic Spice Girls tribute bands on offer, our acts perfectly capture the charisma and energy you would only expect from the Spice Girls.

About the Spice Girls

Formed in 1994, the Spice Girls were an English pop girl group made up of Melanie Brown (Scary Spice), Melanie Chisholm (Sporty Spice), Emma Bunton (Baby Spice), Geri Halliwell (Ginger Spice), and Victoria Beckham (Posh Spice). After releasing their debut single, Wannabe, in 1996, the Spice Girls reached the number one spot in 37 countries, kicking off their global success. After their initial fame, the Spice Girls’ debut album, Spice, sold more than 31 million copies, making it the best-selling album by a female group in history.

Over the course of their career, the Spice Girls sold 85 million records globally, earning them a spot as the best-selling female group of all time, one of the best-selling pop groups of all time and the biggest British pop success since The Beatles. As a testament to their groundbreaking influence on music, the Spice Girls have won five Brit Awards, three American Music Awards, three MTV Europe Music Awards, one MTV Video Music Award and three World Music Awards. They have produced nine number one hits in the UK, including three consecutive Christmas number ones in the UK and debuted on the US Billboard Hot 100 at number 11, the highest ever debut by a British band.

Contact Champions Music & Entertainment to enquire about hiring Spice Girls tribute acts today. Get in touch by calling us on 0203 7934 042 or by emailing [email protected] now.