5ive is a pop supergroup who established major popularity in the 1990s and have had significant global success as a 5-piece boy band. They brought hip-hop and pop together to thrill global audiences in the 90s and now they are doing it once more.

Selling a remarkable 20 million records, the boy band had four top ten albums, all widely loved by their adoring legion of fans. They had a series of sold-out tours at some of the UK’s biggest venues while picking up a Brit Award in 1999 as British Breakthrough Act, before remarkably taking the gong for Best Pop Act in 2000, showing their extremely fast progression. Only two years before 5ive’s breakthrough accolade at The Brits, Spice Girls creators Bob and Chris Herbert formed 5ive, wanting to create a 90s boy band with ‘attitude and edge.’ That is exactly what happened, and an advert in the newspaper, The Stage brought three thousand applications before they settled on Neville, Abz Love, Conlon, Jason “J” Brown and Robinson to bring the band to life and make 5ive superstars.

They were chosen for their varied and talented vocals and ability to rap as well as hit the high notes. 5ive have always had the charm, the dance moves and the quality to bring an all-round good time. Bob and Chris Herbert certainly found their band when they found 5ive, the band struck a chord with the youth culture of the 90s in the way they were effortlessly rebellious but charming and friendly at the same time. They have been credited with opening the door for a new era of bands and helping to bring hip-hop further into the mainstream.

After their 2001 split and brief reformation in 2006, 2012 brought their highly anticipated reunion. They played a comeback tour at the Hammersmith Apollo in 2013 after featuring in the ITV2 documentary, The Big Reunion. Since then 5ive have toured through the UK and Europe, taking their stage show to clubs, concert halls, arenas and festivals throughout the country. ‘When the Lights Go Out’, ‘Everybody Get Up, ‘Inspector Gadget,’ ‘Keep on Movin’. ‘Rock the Party,’ ‘We Will Rock You’ and ‘Don’t Wanna Let You Go’ all were well appreciated by their audiences and brought them multi-platinum success. ‘The Fab Five’ has performed at prestigious venues in the past, gracing football stadiums and arenas with their enviable talent. 5ive are available now to book as your band for hire and are perfectly suited to club entertainment, bars, concert halls, theatres and arenas as well as all manner of corporate events.

"Even as a 3, these guys pulled it off as if they were a 5! They seamlessly covered the departed member's parts and left you questioning if the other members ever even existed at all. They were professional and went above and beyond to deliver a great event for us and we are even bigger fans now than we were before" - Holly, Snug

Contact Champions Music & Entertainment to enquire about hiring 5ive today. Get in touch by calling us on 0203 7934 042 or by emailing [email protected] now. 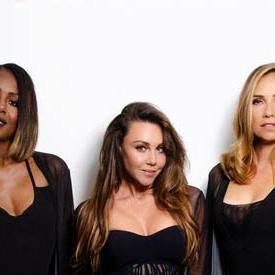