Gerry Graham is a quick-witted and engaging British comic with a smooth stage presence and vivacious charm. Highly experienced and a true professional, Gerry puts a crowd at ease as soon as he steps out on a stage. A wonderful entertainer with hilarious material and meticulous delivery, Gerry is a stand-up star.

British comedian Gerry Graham is as coolly charismatic as they come. He forges an unbreakable bond with his audiences from the first moment, as he serenades them with one-liners, a delightful charm and some hilarious true-to-life stories.

He can set up a joke and finish one with impeccable comic timing and top-level delivery. He has been entertaining audiences worldwide for over 35 years and has not slowed down.

Gerry has entertained on cruise ships, in theatres, clubs, jungles and in aircraft hangars entertaining our troops. He is one of the most consistent and hard working comedy entertainers in showbiz.

Popular with a mature audience Gerry has performed a number of shows which hark back to the good old days, from the wartime entertainment of the George Formby and Vera Lynn type to the swingin’ sixties all the way through to the best of the noughties. Gerry is instantly popular with a wide range of audiences.

Voted the highest-scoring comedian for Saga Cruises 2011, Gerry has performed at hundreds of venues across the nation, most notably the London Palladium, the Playhouse Edinburgh, Nottingham Theatre Royal, Royal Concert Hall and many more.

In addition, he has featured in a multitude of television and radio shows including Auf Wiedersehen Pet, Connie, First Among Equals, Wipe Out, The Ritz, Seventh Heaven, Cable TV, The Stuart Hall Show, Radio Derby Out and About, Comic Relief Roadshow, Radio Saxon, Radio Cumbria, BBC Radio Nottingham, BBC Radio 2 and Lost Empires.

Gerry’s ability to communicate and connect with audiences has never swayed and he still possesses the ability to capture a crowd with his sharp wit. Alongside his professionalism, this makes him the ideal act for a wide array of events, for television or corporate entertainment. He is truly one of the gentlemen of British comedy.

Book comedian Gerry Graham among the stand-up comedians or after dinner speakers for your private party, or as an entertaining event host for your corporate events. Simply contact the Champions Music & Entertainment agency via [email protected]. Alternatively speak to a member of the management team directly on 0203 793 40 42. 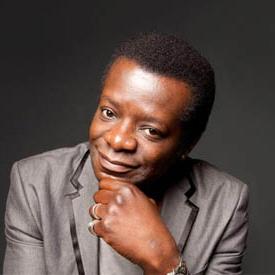 Stephen K. Amos One Of The Leading British Comics