Russell Hicks is a leading comedian, who has performed at top comedy venues such as Up the Creek, The Stand, Hot Water Comedy Club and the Top Secret Comedy Club. Named as one of the Top Six Comics to Watch by Talk Magazine, Russell has also produced bespoke content for the likes of Instagram, Yahoo and Facebook and completed partnerships with Google and PayPal. Described as ‘provocative, anarchic and unfiltered’ Russel is a great choice as a comedian for a range of events.

Comedian, Russel Hicks, has a cult following for his ‘provocative, anarchic and unfiltered’ comedy. Combining his razor-sharp wit with an unapologetic style, Russell has performed at venues such as the Top Secret Comedy Club, the Hot Water Comedy Club and Up the Creek. Creating unique content, Russell has previously partnered with brands such as PayPal and Google, as well as having his own monthly residency at the famed Top Secret Comedy Club located in London. Now booked as a comedian for a range of corporate, public and private events, Russell is guaranteed to be a hit with audiences of all kinds.

In high demand for his comedy genius, Russell has previously created bespoke content for Facebook, Yahoo and Instagram. Boasting a substantial following on Instagram and TikTok, Russell adapted his delivery style in 2020, performing virtually during the Covid-19 pandemic. Hosting digital events, online comedy nights and virtual corporate events, Russell is a versatile performer who adapts his material to suit a range of audiences. Also a talented writer, Russell has lots of exciting writing projects in the pipeline, such as with the BBC.

Named as one of the Top Six Comics to Watch by Talk Magazine, Russell is now booked as a comedian to perform at a variety of corporate events, private parties and top comedy venues. Captivating audiences with his brash Americanisms and risk-taking comedy, Russell’s comedy is one of a kind. Having appeared on What’s News? and presented Beat The Street and Room of Doom for Yahoo, Russell is a versatile performer who is instantly recognisable for comedy enthusiasts. When looking for a comedian who will have your event guest entertained all night long, make sure to book unapologetic and unique comedian Russell Hicks.

Contact Champions Music & Entertainment to enquire about hiring Russell Hicks today. Get in touch by calling on 0203 7934042 or by emailing [email protected] now. 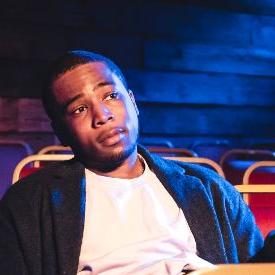