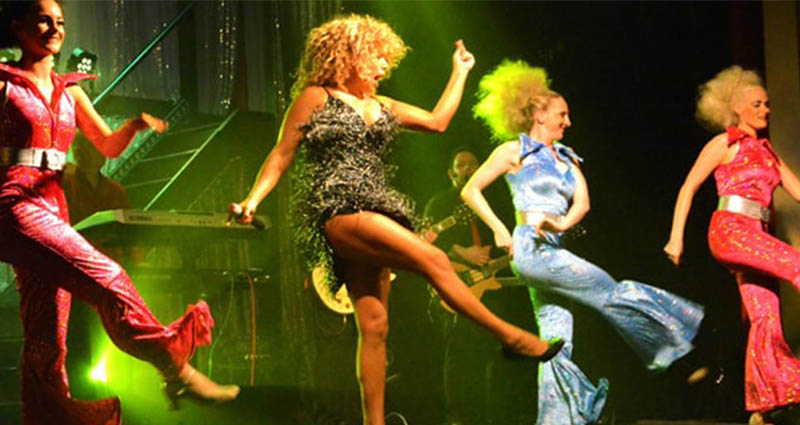 When it comes to global superstars, few have had such an impact on the world of music as Tina Turner. One of the world’s best-selling music artists of all time, she has received eleven Grammy Awards, including eight competitive awards and three Grammy Hall of Fame awards.

She has sold more concert tickets than any other solo performer in history, and her combined album and single sales total approximately 180 million copies worldwide, making her one of the biggest selling females in music history.

Now 76 years old, Tina has taken a step back from recording and performing, but you can book the next best thing, a foxy lady who has captured the very essence of Tina Turner, including the famous coarse voice and on-stage swagger, and her backing band.

Totally Tina recreates the spectacle and energy of her live shows with a six-piece live band, four dancers and singer Justine Ruddock’s incredible impersonation of the Queen of Rock and Soul.

The tribute act will take you from the early days with Ike, and songs like River Deep, Mountain High, through Tina’s solo comeback in the 80s with her incredible cover of the Al Green classic, Let’s Stay Together, all the way to her massive solo hits like The Best and What’s Love Got To Do With It.

Her talent and drive have seen her entertain the troops in Germany and Ireland and travel with Thompson Holidays as far as Mexico, Dubai, Corfu, Tenerife, and Hong Kong with her stunning solo tribute.

As a testament to her success, Totally Tina’s calendar is almost fully booked, with gigs all over the UK, in Europe and on cruise ships all over the world.

To book leading Tina Turner tribute act Totally Tina, either as the solo, with dancers or with a full live band, contact Champions Music & Entertainment completing the online form or calling 0207 078 78 76.

Blog Back to the blog...
Related Posts
Tribute Acts: Just Jessie
A Look Back at The 2018 National Tribute Music Awards