Are you ready to go back to the 1980s?  From start to finish this high energy 80’s School Disco show will entertain you with all the best 80s songs you know and love!

This show has got lively dance routines, fabulous costumes and loads of audience participation to get you all involved! Sing along to Whitney, Madonna and Tiffany then dance the locomotion Kylie style and get ready to play your air guitar! If you’re a girl who wants to have fun or a guy who likes to get ‘Footloose’ on the dance floor then this tribute to the 80’s is most definitely for you! The 80s School Disco singers have been performing together for over a decade.

They are no strangers to the world of entertainment and over the recent years this highly trained, professional team have worked with some of the UK's top function bands, performed in numerous West End Musicals including Mamma Mia, Cats, Les Miserables, Fame, Grease, Evita, Oliver, Billy Elliot and Blood Brothers. The team have also performed on major cruise lines such as Royal Caribbean, Celebrity, Holland America, Fred Olson, P&O, Carnival and Princess.

In addition, they have appeared in TV shows, films, commercials and their voices can often be heard on TV and radio adverts as well as performing backing vocals for well know recording artists and bands. The team have quite the CV! The 80s School Disco musicians have worked with the likes of Take That, Lady Gaga, Pixie Lott, Alexandra Burke, Liam Payne (One Direction), Massive Attack, Beverley Knight, Lemar, Sophie Ellis-Bextor, James Taylor Quartet, Status Quo, Hot Chocolate, Jocelyn Brown, Alison Limmerick, Angie Stone, Nathan Moore (Brother Beyond), Antony Costa (Blue) and The Feeling to name just a few!

Show Line-up: 80s School Disco is available as a duo or trio to professionally recorded backing or with a live band (6 - 8 piece). It can also be booked alongside their 70s Fever show for a night of two halves.

"I just wanted to say a big thank you to you lovely ladies who did an outstanding performance for our 80’s Tribute Nights. They were amazing singers and really got the crowd on their feet!" - Hotel Party Night, Denham

"Well my legs are well and truly aching!! A massive thank you to you all!!! Nearly everyone has asked for a card!! So we will pass them on!! Again thanks so very much for making it a fabulous night!!" - 50th Birthday Party, Abbots Langley

"I just wanted to thank you both so much for last night. I had such a great night, I didn't stop dancing all night and my family and friends all loved it too! You both have a real talent for getting everyone up and joining in and are such good singers. Thanks for making my party go with a bang :) wendy the fifty year old!" - 50th Birthday Party, Surrey

Contact Champions Music & Entertainment to enquire about hiring 80s School Disco today. Get in touch by calling us on 0203 7934 042 or by emailing [email protected] now. 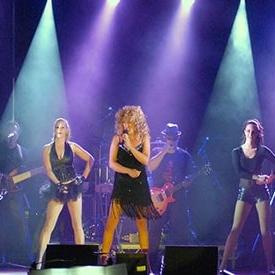