Barry Cryer’s long and illustrious comedy career has seen him become one of the most renowned in the business, becoming a popular name on television and stage as well as behind the scenes as a writer.

Comedy legend Barry Cryer OBE is without question one of the most prolific comedians and scriptwriters ever to have come out of the United Kingdom. With a long list of comedic achievements to his name, Barry’s unrivalled creative wit has enabled him to rise to the very top of the comedy industry.

Barry’s debut comedy act saw him perform at London’s Windmill Theatre after impressing the iconic theatre impresario Vivian Van Damm. In the years that followed, Barry began to focus more strongly on his comedy writing - the success of which would eventually propel him to stardom. His incredible writing talents saw Barry called upon to perform writing duties for a vast array of notable comedy performers. Over the course of his career, Barry wrote material for the likes of David Frost, Bruce Forsyth, Jasper Carrott, Rory Bremner, Dave Allen, Spike Milligan and Kenny Everett.

One of his first tastes of success came when he began to write material for the sketch comedy show The Jimmy Logan Show. Fulfilling an increasingly prominent role in the world of comedy broadcasting, Barry soon began to write for A Degree of Frost and The Frost Report. The latter programme became an iconic television show of the 1960s, helping to launch the careers of notable performers such as Ronnie Corbett, Ronnie Barker and John Cleese.

A talented performer in his own right, Barry continued to make appearances as a comedy act. He performed in several television series, including The Steam Video Company and Jokers Wild. In addition, Barry also featured frequently on the country’s airwaves, appearing in the radio series Hello, Cheeky!, I’m Sorry I Haven’t a Clue and You’ll Have Had Your Tea.

Barry’s incredible achievements have seen him become one of the most famous comedians in the country today. Having mastered the art of live comedy, Barry’s reputation as an entertainment veteran has ensured his longevity as a respected comedy performer. His hilarious material and enviable stage-presence have seen him embark on several of his own comedy tours, including The First Farewell Tour and his follow-up Still Alive. To this day, Barry continues to enjoy recognition as one of the leading British comics and after-dinner speakers, making him the ideal choice for corporate events and various other occasions.

If you would like to book Barry Cryer as the comedian or after-dinner speaker for your next event, contact the Champions Music and Entertainment agency via [email protected]. Alternatively, speak to a member of the management team directly on 0203 793 40 42. 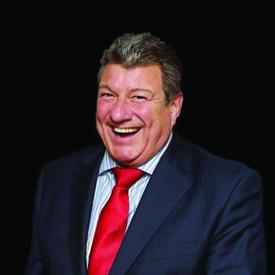