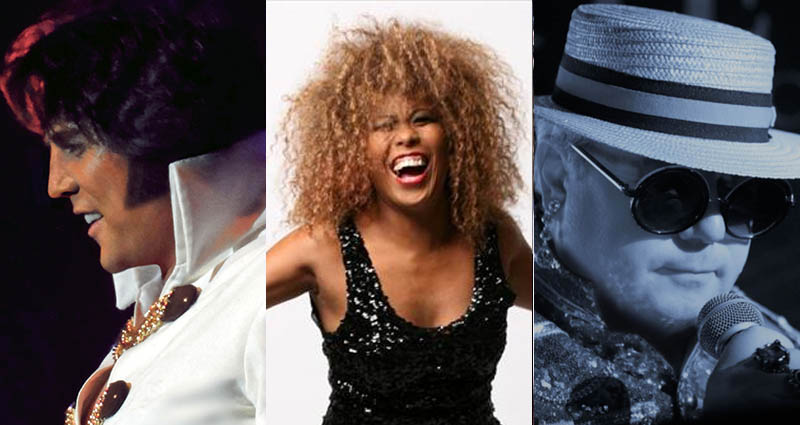 With their uncanny resemblance and incredible talent, our roster of tribute performers are just as good as the real thing - if not better! They have dedicated their career to their chosen music legend, making our acts some of the best tribute bands on the market. If you need tribute night acts or entertainment for your themed party, we have the musicians for you. From their costumes to their stage presence, your guests won't believe their eyes. Take a look at some of the best cover bands and tribute acts available to book!

Paying tribute to one of the most iconic musicians in the industry's history, Typically Tina is a showstopping performer. Starting her career as a ballet dancer and then in the West End production of Miss Saigon, she has since become Simply The Best Tina Turner tribute act. Emulating a multi-Grammy award winning singer is no small task, but Typically Tina's onstage presence rivals that of the Queen of Soul herself.

Perfectly emulating the class and charm of Tom Jones, Jed Fry has perfected his tribute act, down to the Welsh crooner's hand mannerisms. With over three decades of experience in the industry, Jed can confidently perform either as a solo act or with an entire band. Few can rival Jed's showmanship, genuine talent and hilarious audience interactions.

Many tribute acts sound like their chosen performer, but very rarely do they look as indistinguishable as Jo Alexander. With her American twang and fringed, sparkling outfits, Jo can bring the Queen of Country to your stage, thrilling audiences of all ages. She has spent over 25 years in the industry, performing on West End stages and in her own show, The 9 To 5 Show.

From the USA to the UK, Australia to your stage, Elite Elton is a truly unforgettable performer. He has something for everyone, including his vast range of glittering costumes, expert piano playing and repertoire of Elton's greatest hits. Audiences will fall head over heels for this Elite Elton, one of the best tribute acts available to book.

When original member of The Beatles, George Harrison, admits "you probably know the chords better than I do", you know that your tribute band is a cut above the rest. The Bootleg Beatles have performed for royalty, including the Queen at Buckingham Palace, a testament to their top-class tribute act. From Rod Stewart, Oasis and David Bowie, the tribute band have also graced the stage with some of the world's most iconic musicians.

7. Spice Forever (as The Spice Girls)

Arguably one of the UK's leading Spice Girls acts, Spice Forever have the characterisation, enthusiasm and talent to rival the real thing. Their instantly recognisable roles resonate with audiences, inviting them to enjoy the magic of the Spice Girls at your event. Guests of all ages will fall head over heels for this act, thanks to their multi-platinum selling set list of 90s hits.

With a vocal range to match that of Freddie Mercury himself, Magic Queen are one of the best Queen tribute acts available for your event. From themed parties to corporate parties, include the majesty of 80s rock with this tribute act above the rest. Your audience will never forget an event featuring Majesty Queen, thanks to their expert recreation of Queen's greatest hits.

As one of the best Madonna tribute acts in the world, Material World sets herself apart with her replication of the pop legend's iconic dance moves. Armed with a set list of Madonna's chart-topping hits, your dance floor will be filled all event long with Material World. No matter their age, profession or background, audiences of all demographics will be thoroughly entertained by this leading Madonna tribute act.

Shawn Klush is an Elvis tribute performer above the rest. After winning the World's Greatest Elvis Competition, he has truly earned the title of "best Elvis Presley tribute act". Book a leading performer with this dedicated musician, who has toured the world as the King of Kings. From his jewel encrusted costumes to his iconic Elvis hip swing, your audience will be blown away by this iconic tribute act.

To book one of our talented tribute acts for your next birthday party, corporate event or concert, contact the Champions Music and Entertainment agency via our online contact form or by calling one of our booking agents directly on 0203 7934 042.

> More posts by
Blog Back to the blog...
Related Posts
10 Critically-Acclaimed Tribute Acts Just Like The Real Thing
10 Performers Paying Tribute To Music Legends
Recap Of The Big Winners At The National Tribute Music Awards 2019